A review of the greatest spectacle, this year, in Chess, by the head cosmonaut of our Chess Galaxy, Dr. Nagendra Rentala. You can read the first part here.

Most of the top GMs adopt a standard strategy during mega Swiss open tournaments to protect their ROI – collect a decent prize money at the end of the event instead of going all-out for the solo first prize and risking everything. As a result, it is not uncommon to have four or five players sharing the combined prize money for those top spots. As already briefly reported, the Las Vegas Open was no exception in this respect.

There is an interesting dynamic about how the top players achieve their prize money goals. They generally apply four strategies during the course of the tournament. The first one is how to deal with lower rated opponents, as is usual during the first two to three games in a 9-round Swiss. Top players are expected to vanquish the opposition during this phase providing them with a decent score when they meet their peers in the second phase of the tournament. The following game, played in the very first round between the top seed Shimanov and Deepak Aaron illustrates when that strategy does not always work.

Deepak Aaron is the grandson of Manuel Aaron, India’s first IM and many times National Champion. With a 300 + points rating difference, the top seed Shimanov was expected to win this encounter against Deepak. With hindsight, probably the French defence is not the best choice for Shimanov to play for a win. After obtaining a standard, theoretical opening position, Deepak started a direct attack on the black king with moves like Rh3-g3 and pushing the pawn to f5 catching Shimanov by surprise. Flustered by the unexpected turn of events Shimanov opted for passive defence with 20. … Qe7 instead of calmly accepting the sacrificed pawn and weathering the storm to gain the upper hand. The game ended in a draw by repetition with Deepak in an advantageous position.

The second dilemma top players need to resolve over the course of a tournament is when to push for a win, when to play safe and settle for a draw or even call it even at the very beginning (called a GM draw) to conserve energy for the next game. GM draws occur between players who have a mutual respect for each other as strong players or between friends. On occasion, the player with white pieces and a superior rating is obliged to push for a win. This choice and more importantly its proper execution is really what separates a GM and a Super GM.

Sometimes the decision to push too hard backfires as in the following 6th round encounter between GM Victor Mikhalevski rated 2551 against IM Chen Wang (2503). The following position was reached after 70. … Kh7. 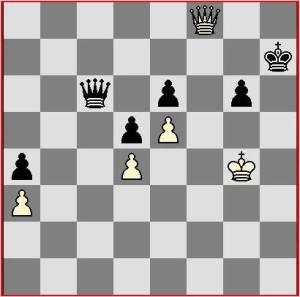 Instead of repeating the position with Qf7+ / Qf8+ and claiming a draw, Mikhalevski overestimated his chances and played 71. Kg5 ?? in the above position. With a series of checks, black captured the d-pawn. In resulting pawn race, white fell one move short and resigned after 82. … Kg4, since black promotes his pawn with a check.

The third strategy is how to play against a peer for a win with the white pieces. The eventual winner on tie-breaks, Giorgi Kacheishvili (2578) demonstrates impeccable technique in the following 8th round game against a higher rated opponent Michael Roiz (2614). This position was reached from a Queen’s Gambit Declined (QGD) opening after 21.Qf4. It offers a classic lesson as to why initiating a capture is not the best move in most situations. In a balanced position, black has to contend with the task of a long drawn defense of his isolated pawn on d5. This is an occupational hazard for black in a QGD and not too much to worry about since all black pieces can be rallied to the pawn’s defense if required. Roiz exchanged the queens with 21. … Qxf4 (Qb8!), expecting the routine capture 22.Nxf4. 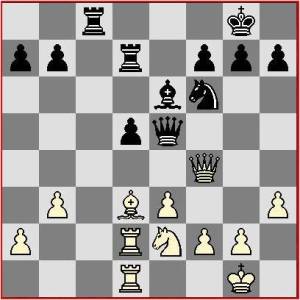 Instead, Kacheishvili replied with the not so obvious 22.exf4! and by capturing with the e-pawn, white setup a 4- 3 pawn roller on the king-side . These pawns gradually dislodged the bishop on e6 and the knight on f6 – defenders of black’s isolated weak-pawn on d5. Modern day understanding and assessment of chess positions is based on such minute factors. White continued to exchange the rooks and marched with his king to b6 to win a nice positional game in a key encounter.

Completing our four-fold Swiss strategy is what to do when the first three strategies fail to deliver the desired result. In the following last round game GM Alex Lenderman (2549) was having black against another talented youngster IM Darwin Yang (2468). In round 7 Lenderman lost against GM Sergey Erenburg (2625) but bounced back in the next round with a win against IM J.D. Bryant (2401). Still Lenderman needed a win in the 9th and final round to join the winners club. Playing with great determination, he reached the following end-game position after 59. … Ra7.

Black’s advantage is obvious – active R + B against white’s R + N committed to defensive duties. Black’s g-pawn holds white’s f and g pawns but with a doubled-pawn on d-file, progress towards victory does not look easy. By threatening to invade from a1 square attacking the white knight or from h4 attacking the g4 pawn, Lenderman skillfully used the greater mobility of his rook to disrupt the coordination of white’s pieces. Forced to play f3 at some point, white weakened his second rank. After another 20 odd moves, it was curtains for white in the following position after 81. … d2!. Unable to stop the d-pawn from promotion (82.Nf3+ Rxf3! -+), Yang resigned catapulting Lenderman to a share of the top spot.

The event produced some very interesting and instructive games in spite of the absence of big-wigs like Nakamura and Kamsky. GM Larry Christiansen (2582) was in and out of the tournament taking half-point byes in early rounds while GM Jan Ehlvest defaulted after disappointing losses in rounds 3 and 5. US Women’s champion GM Irina Krush (2499) also faltered after a good start (2.5 / 3) by losing the next three games. More games and results at http://chesstournamentservices.com/cca/north-american-open/

–Dr. Nagendra Rentala [Dr. Rentala is the Head Cosmonaut of the Chess Galaxy at Sportz Cosmos]