Predictability: Does the Flap of a Butterfly’s Wings in Brazil set off a Tornado in Texas? [1]

When I first presented my preliminary report on the test of divisibility of seven at the American Mathematical Society in 2002 [2], little did I know that my theory had a deep connection with Wawrinka’s Australian open 2014win?

Let N be a very large number and let J be the last 6 digits of N. Then, for an appropriate number I,

The reason for this is that

By repeating this construction, one eventually reaches an M with 6 or fewer digits whose remainder upon division by 7 is the same as that of the original number. The rest of the theory will be available at a nominal fee i.e. on request by email.

May be we can annotate any number to our proposed theories but let’s make it chaotic.

The essence of the proposed theory is that a great man named Roger Federer winning the Australian Open in 2004 for the first time could have had a chaotic effect on the current outcome. Does the universe conspire to produce certain results?

The “Butterfly Effect” is the essence of chaos. It is dependent immensely on the initial conditions (which is arguable). I am particularly interested in the great Mathematician Edward Lorenz’s theory. He coined the term “Strange Attractors”. The Lorenz Attractor is one of the strange attractors i.e. the dynamics on the system are chaotic.

Roger Federer and StanislasWawrinka’s lives could be separated by an indeterminate amount. They are from the same country but other than sharing the passion for tennis, I don’t think they participate in each other’s lives in a way of helping each other out to alter the course of a Grand Slam result. Hence in my opinion this could be termed as a “Strange Attractor”. This is not a conclusive argument and is definitely open for debate or even outright rejection based on a sound counter argument. That is the whole point of proposals of theories isn’t it? 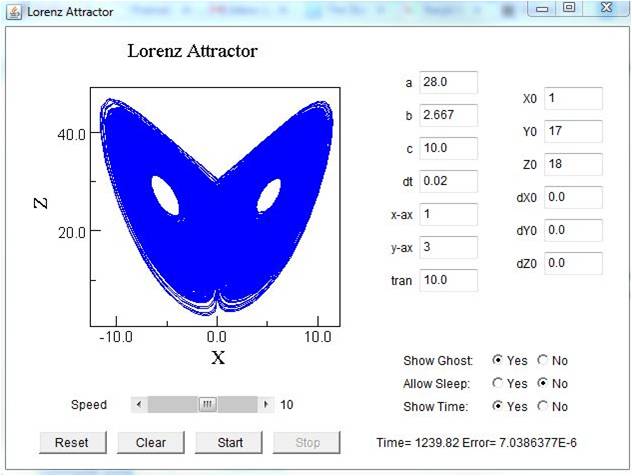 The solution seems chaotic and resembles a butterfly revolving around the two points i.e. the “Strange Attractors”. The initial conditions assumed here are the Wawrinka prediction of one Grand Slam and Federer’s 17 slams before the 2014 Australian open.

March 28th is Wawrinka’s birthday and the simulations for a >28.0 seem to be chaotic too? Is it possible to develop a prediction model based on the chaos theory[5]? Are the Universe and the numbers in it masquerading as chaos actually conveying a deeper meaning? Could I run some more simulations and predict if how many Grand Slams more Federer, Nadal, Djokovic, Azarenka and other favorite players of mine will win?

[1] Edward Lorenz, December 1972 meeting of the American Association for the Advancement of Science in Washington, D.C

[5]The writer believes strongly in Chaos theory but is a novice and would love some guidance.

-Ranjit Eswaran [Ranjit Eswaran is the captain of the Tennis Galaxy at Sportz Cosmos. You can contact him at our gmail address: sportzcosmos]

8 thoughts on “Do Numbers Predict Better Than Nostradamus?”