The stage is set for the business end of a grand slam as the line ups for the pre quarter finals to be played on Monday were completed on a glorious day of tennis at Wimbledon. Leading the men on day six were the seven time champion Roger Federer of Switzerland and three time champion Novak Djokovic of Serbia. Both had decent workout on center court and have reached the fourth round without each player dropping a set.

The second seeded Djokovic, who has an outside chance of regaining number one ranking, looked to be hitting the right form as he eliminated the Latvian Ernests Gulbis in straight sets, 6-4, 6-1, 7-6(2). Gulbis, ranked 589 in the world and playing with protected ranking, broke early in the opening set but then dropped serve twice to lose the set 6-4. Djokovic was only pushed in the third set which he won in a tie-break.

He was followed on center court by Federer who also got off to the perfect start breaking the 27th seeded Mischa Zverev of Germany’s serve in the fourth game. He dropped serve in the seventh game and had to save two break points in the eleventh game before asserting himself in the tie-break which he won 7-3. The No.3 seed, Federer, could have broken serve twice in the next two sets, but the gritty 29 year old Zverev limited it to only one in each set. It was enough for the no. seed who won 7-6(3), 6-4, 6-4.

Next up for Djokovic will be the unseeded Adrian Mannarino, who won an all French affair upsetting the 15th seeded Gael Monfils 7-6(3), 4-6, 5-7, 6-3, 6-2 in three hours and thirty minutes. Mannarino was the runner up in the inaugural warm up event in Antalya, Turkey where he lost to Yuichi Sugita of Japan, but he avanged his defeat in another five setter on Thursday beating Sugita. Federer will play the rejuvenated Bulgarian Grigor Dimitrov, seeded thirteenth who was on court for just one hour, as Dudi Sela became the latest player to retire after losing the first two sets 1-6, 1-6. Sela had upset the American John Isner in the second round in grueling five sets.

It took the 24th seeded American Sam Querrey just four minutes to complete his suspended third round match against the 12th seeded Frenchman Jo Wilfred Tsonga, 6-2, 3-6, 7-6(5), 6-1, 7-5 on court no. 2. Alexander Zverev, the 10th seeded German proved too strong for Austrian Sebastian Ofner as he advanced with a 6-4, 6-4, 6-2 win to set up a clash against last years runner up Milos Raonic of Canada. The sixth seed was too strong for the Spaniard Albert Ramos-Vinolas, winning 7-6(3), 6-4, 7-5.

The following is the line up for the men’s round of 16 with my pick mentioned first :- 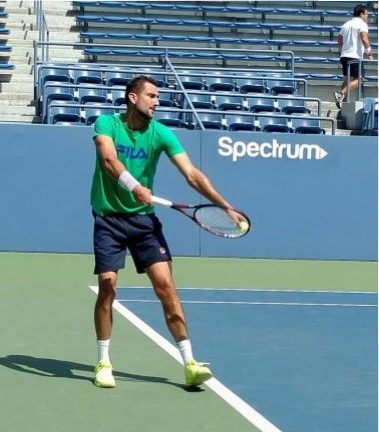 In the ladies section of the draw there were close shave for both the top seeded German Angelique Kerber and the fifth seeded former world number one Caroline Wozniacki of Denmark. Last years beaten finalist Kerber edged past the American Shelby Rogers 4-6, 7-6(2), 6-4, while Wozniacki beat the Estonian Anett Kontaveit of Croatia, 3-6, 7-6(3), 6-2. The 2012 finalist Agnieska Radwanska of Poland also took three sets in the opening match of the day on center court to beat Timea Bacsinszky of Switzerland 3-6, 6-4, 6-1.

The other players to advance on Day six had few such problems as they came through in straight sets led by the 2015 runner up Garbine Muguruza of Spain who was a 6-2, 6-2 winner over Sorena Cirstea of Romania. The Russian Svetlana Kuznetsova also dropped just four games to beat Polona Hercog of Slovenia 6-4, 6-0. In an all American affair Coco Vandeweghe beat Alison Riske 6-4, 6-2. The Croatian Petra Martic was a 7-6(6), 6-1 winner over Zarina Diyas of Kazakhstan. Slovakia’s Magdalena Rybarikova was beat Lesia Tsurenko of Ukraine, 6-2, 6-1.

Following is the line up in the ladies round of 16 with my pick mentioned first:-