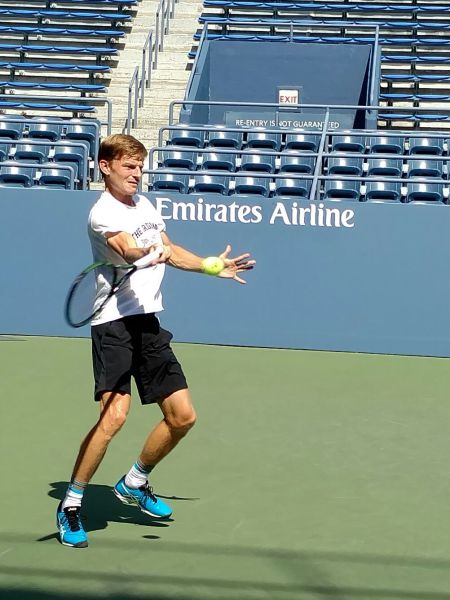 After the completion of second round action on Thursday in the first grand slam of the year, only 32 men and women out of the original 128 remain in the draw. Led by defending champion Roger Federer and six time former champion Novak Djokovic who is on the comeback trail after elbow injury which kept him out of action since Wimbledon in July. Joining them are the Argentine Juan Martin Del Potro, the Austrian Dominic Thiem and Tomas Berdych of the Czech Republic. The 2014 champion Stanislas Wawrinka of Switzerland and David Goffin of Belgium were surprisingly knocked out by lesser ranked opposition as the upsets continued in Melbourne.

Only 20 out of the 32 seeded men have survived the opening two rounds as the five time champion Roger Federer became the last man through to the round of 32 after completing a 6-4,6-4,7-6(4) win over the German Jan Lennard Struff. The second ranked Swiss broke serve at 2-2 in the first set and 3-3 in the second but inexplicably dropped serve in the fourth game of the third set against the 55th ranked German.

Federer was within a point of going down 1-4 but recovered quickly to break serve rightaway. The 19 time Grand Slam champion faced break points in the very next game but saved them and at 5-5 in the third set himself failed to convert on two break point opportunities. In the next game he served three aces to force a tie-break which he won in routine fashion: 7-4 on his second match point. He next plays Frenchman Richard Gasquet who was a 6-2,6-2,6-3 winner over the Italian Lorenzo Sonego. Federer leads the 29th seeded Gasquet 16-2 in career meetings going into Saturday’s round of 32 match.

In two of the biggest upset of the tournament, the 2014 champion Wawrinka, seeded 9th crashed out after a 2-6,1-6,4-6 loss at the hands of the 97th ranked American Tennys Sandgren who before the tournament had never won a match at any of the majors and had lost in the opening round at Pune and then in Auckland going into the Open. The evergreen Frenchman Julien Benneteau, 36 years old, upset the seventh seeded David Goffin of Belgium 1-6,7-6(5),6-1,7-6(4). The Austrian Dominic Thiem too looked like joining them but came back from a two set deficit against little known American Denis Kudla 6-7(6),3-6,6-3,6-2,6-3. Fourth seeded Alexander Zverev beat compatriot Peter Gojowczyk 6-1,6-3,4-6,6-3.

The remaining men to advance were the left handed Frenchman Adrian Mannarino, seeded 26th and the 25th seeded Italian Fabio Fognini. They have been joined by Marton Fucsovics of Hungary who upset the American Sam Querrey, seeded 13th, 6-4,7-6(6),4-6,6-2. The Argentine Nicolas Kicker, the Korean Hyeon Chung also won. The German Maximilian Marterer triumphed over the former world no. 7 Fernando Verdasco of Spain, 6-4,4-6,7-6(5),3-6,6-3. The 34 year old Verdasco was involved in a five hour marathon semi final against Rafael Nadal in 2009, the longest match at the Open at that time.

The following eight matches are lined up in the top half of the men’s draw on Friday, my pick is mentioned first :-

The Russian Maria Sharapova continued her comeback after a lengthy dope ban with a 6-1,7-6(4) win over the 15th seeded Anastasija Sevastova of Latvia. In the next match on the Rod Laver Arena, Su-Wei Hsieh of Chinese Taipei upset the third seeded Garbine Muguruza of Spain, the reigning Wimbledon champion, as she won 7-6(1),6-4. Former world number One Angelique Kerber of Germany was a 6-4,6-1 winner over the Croat Donna Vekic. The top seeded Simona Halep beat Eugenie Bouchard 6-2,6-2 to stay on course for her maiden grand slam.

There was a win for the local favourite Ashleigh Barty who beat the Italian Camila Giorgi 5-7,6-4,6-1. American Madison Keys dropped only one game in seeing off the Russian Ekaterina Alexandrova. Frenchwoman Caroline Garcia beat Marketa Vondrousova 6-7(3),6-2,8-6. Karolina Pliskova, seeded sixth dropped only one game in each set against Beatriz Haddad Maia. Other women to advance were Lucie Safarova and Barbara Strycova of the Czech Republic, Agnieszka Radwanska of Poland, Ana Bogdan of Romania and the American Lauren Davis.