All the pre tournament favourites in the top half of the men’s draw have progressed into the round of sixteen led by the world number one Rafael Nadal of Spain who has been joined by the third seeded Bulgarian Grigor Dimitrov, sixth seeded Marin Cilic of Croatia and the local favourite and Brisbane champion Nick Kyrgios. Also advancing was the 10th seeded Spaniard Pablo Carreno Busta and the diminutive Argentine Diego Schwartman, seeded 26th. Briton Kyle Edmund and the veteran Italian Andreas Seppi are also through and are the only unseeded players in the top of the draw.

On a somewhat predictable day the Canberra native Nick Kyrgios remained a perfect 7-0 record in 2018 after a three hour eighteen minute high quality encounter on Rod Laver Arena. Kyrgios saved a set point in the third set tie-break on Tsonga’s serve at 5-6, and then battled back from a 2-5 deficit to take the next five points in a 7-6(5),4-6,7-6(6),7-6(5) win over the 2008 finalist. Both players had 28 aces apiece.

Tsonga converted on two out of his five break point chances and hit 70 winners, Kyrgios could only convert on one out of four break point chances. However, the 22 year old Aussie held his nerve on serve in testing circumstances. He next plays the third seeded Bulgarian Grigor Dimitrov who was a 6-3,4-6,6-4,6-4 winner over the #NextGen ATP Russian Andrey Rublev in the morning session on Rod Laver Arena. 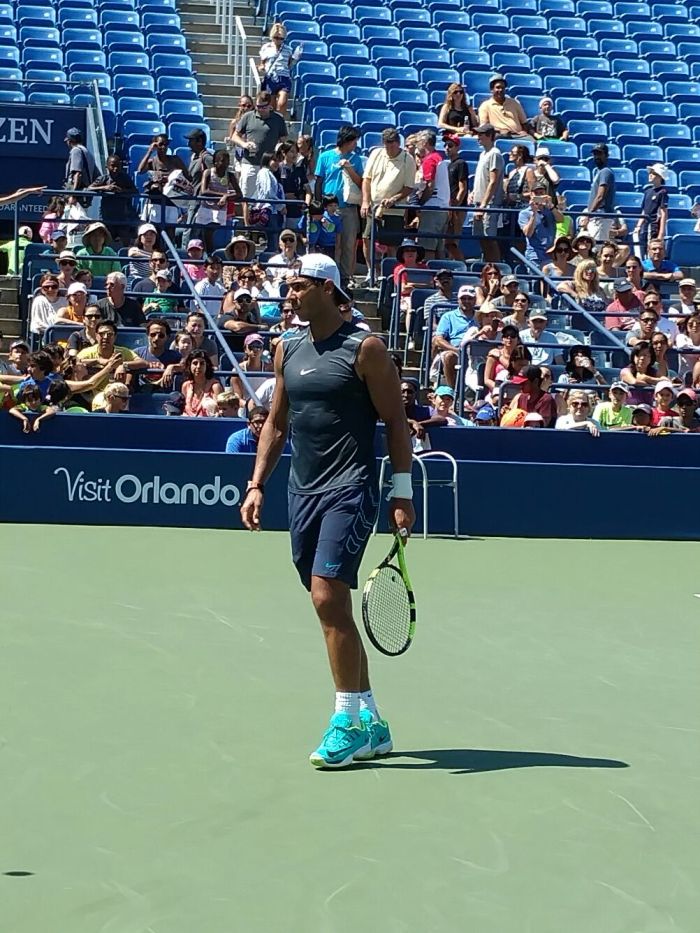 Over on the Margaret Court Arena, Rafael Nadal, the 2009 champion looks to be in Championship winning form as he brushed aside Damir Dzumhur of Bosnia Herzegovina 6-1,6-3,6-1 and is now only one win away from ensuring he retains the number one ranking even if arch rival Roger Federer goes on to win the title.

Nadal is bidding to become the first player in the Open Arena to win all four grand slams atleast twice, Australians Roy Emerson and Rod Laver being the only ones to have done so. He next meets the Argentine Diego Schwartman, who avenged his straight sets loss to the Ukrainian Alexandr Dolgopolov in Brisbane two weeks ago, with a come from behind 6-7(1),6-2,6-3,6-3 in two hours and 38 minutes.

The sixth seeded Marin Cilic who is the only player in the top half of the draw with a major title, having won the U.S. Open in 2014, followed Nadal on court and completed a relatively easy 7-6(4),6-3,7-6(4) win over the 25 year old American Ryan Harrison. He faces the Spaniard Pablo Carreno Busta who beat the seasoned veteran Gilles Muller of Luxembourg, seeded 23rd with a 7-6(4),4-6,7-5,7-5 win.

The remaining two winners on Friday were made to fight all the way as they advanced after gruelling five set wins. 23 year old Briton Kyle Edmund won the last 13 of the final 18 games of his third round match to beat the Georgian Nikoloz Basilashvili 7-6(0),3-6,4-6,6-0,7-5 in three hours and thirty four minutes. For the second time in this tournament Edmund came from 1-2 down in sets, having previously beaten the 11th seeded Kevin Anderson of South Africa.

Kyle Edmund goes on to meet Andreas Seppi who beat the 38 year old gallant Croat Ivo Karlovic in three hours and fifty one minutes after a 6-3,7-6(4),6-7(3),6-7(5),9-7 victory to reach the fourth round. Karlovic, playing in his second consecutive five set match, having beaten Japan’s Yuichi Sugita in the second round, struck 52 aces and had 93 winners but came up short against the 76th ranked Italian who had a modest 23 aces but also hit 82 winners.

The following is the list of matches to be played in the bottom half of the men’s draw with my pick mentioned first:-

The remaining four winners on Friday were all unseeded players as the Croat Petra Martic, Denisa Allertova of the Czech Republic, the German Elise Mertens and the Spaniard Carla Suarez Navarro. Wozniacki faces Rybarikova next, Suarez Navarro meets another Estonian Ana Kontaveit after beating Kaia Kanepi today, Svitolina will play Allertova, while Petra Martic and Elise Mertens complete the round of sixteen in the bottom half of the women’s draw.