Novak Djokovic, Roger Federer and Rafael Nadal wasted little time on Manic Monday as they displayed championship winning form to decimate their fourth round opponents while the 2016 finalist Milos Raonic, probably the last remaining player to challenge their domination blew a golden opportunity to serve out the match at 5-3 in the fourth set before finally succumbing 6-8 in the fifth set to the Argentine Guido Pella. Kei Nishikori of Japan, Roberto Bautista Agut of Spain, David Goffin of Belgium and the American Sam Querrey have joined them in the Quarter-finals.

Rafael Nadal, the reigning French Open champion and the winner of the event in 2008 and 2010, took full advantage of a fatigued Joao Sousa who had required five sets to get past the Briton Daniel Evans on Saturday. The 66th ranked Sousa, the first player from Portugal to advance to the second week at Wimbledon, lost serve twice each in all the three sets as the third seeded Spaniard prevailed 6-2,6-2,6-2. He next faces the lone American representative left in the draw after the 2017 semi-finalist won an all American match up against Tennys Sandgren 6-4,6-7(9),7-6(3),7-6(5). 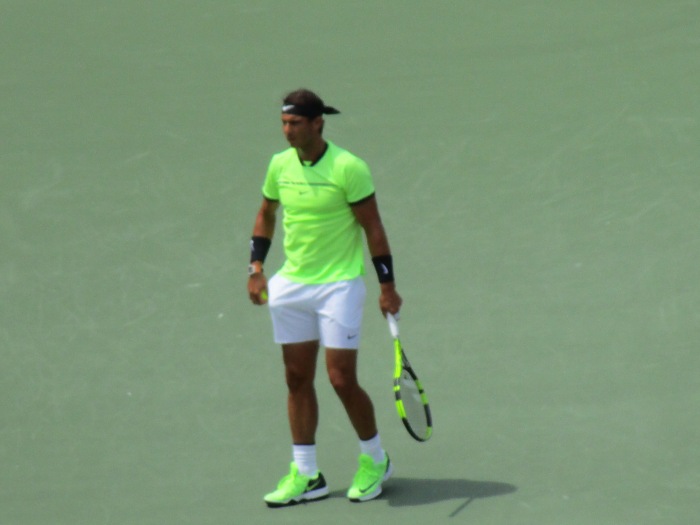 Querrey who has beaten the highest ranked men’s player in the Championship following his first round upset of the French Open champion Dominic Thiem is well known for his four set victory over Novak Djokovic in 2016, just weeks after the Serb had completed a career slam and a non-calendar slam.

Novak Djokovic, the defending Champion and a winner in 2011,2014-15 and 2018, was relegated to court no. One but had little trouble against the little known Frenchman Ugo Humbert winning 6-3,6-2,6-3. Next up for Djokovic is the Belgian David Goffin who erased three set points in the first set tie-break before ending the hopes of the gallant Spanish left hander Fernando Verdasco to score a 7-6(9),2-6,6-3,6-4 win. The 21st seeded Goffin who had reached the final of the ATP 500 event in Halle leading upto Wimbledon takes a miserable 1-5 head to head record against Djokovic in the quarter-finals on Wednesday, but won their last meeting two years ago on the clay courts of Monte Carlo. 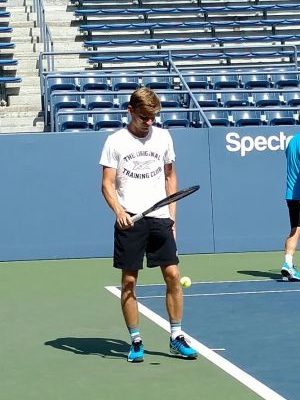 Roger Federer who had dropped the first set of his opening round match against the South African Lloyd Harris rose to the occasion against an in form Matteo Berrettini of Italy as he made only five unforced errors against the 17th seeded Berrettini enroute to his 6-1,6-2,6-2 in just one hour and thirteen minutes. He advances to his 17th quarter-final at the Championships on center court.

The eight time champion in 2003-07, 2009, 2012 and 2017 now stands on the verge of becoming the first player in the Open Era to record 100 wins at a Grand Slam tournament should he get past his quarter-final opponent Kei Nishikori of Japan. The eighth seeded Nishikori needed four sets to beat Mikhail Kukushkhin of Kazakhstan 6-3,3-6,6-3,6-4.

The fourth quarter-final pits the 23rd seeded Roberto Bautista Agut and the Argentine Guido Pella. Agut, the only player to have beaten Novak Djokovic twice in 2019, is the only player left in the draw to still drop a set at the Championship easily tamed another Frenchman Benoit Paire 6-3,7-5,6-2. Pella, seeded 26th added a third Wimbledon finalist scalp to his list of upsets after beating the Canadian Milos Raonic in five sets. The left handed Pella beat the South African Kevin Anderson, the 2018 finalist in the third round on Friday, and had also beaten the 2017 finalist Marin Cilic of Croatia in the third round in 2018. 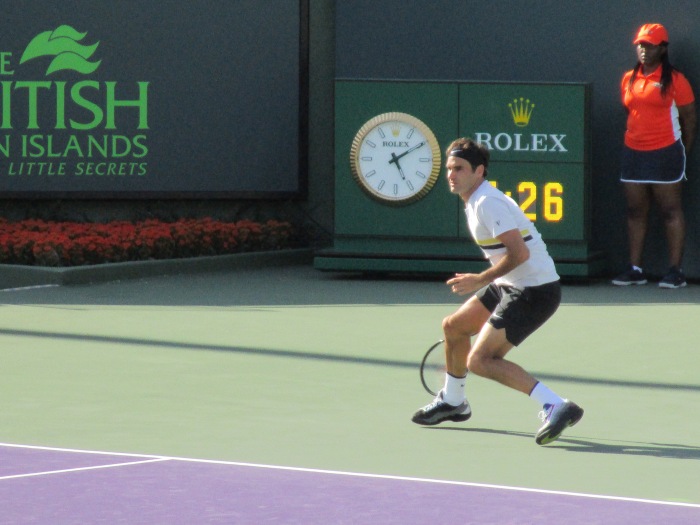 Following is the line up for the last eight with my pick to be mentioned first :-

In the ladies section of the draw, Serena Williams is now only two match wins away from her 24th grand slam title after a hard fought 6-4,4-6,6-3 against fellow American Allison Riske. She now plays Barbara Strycova of the Czech Republic who ended the hopes of the local favourite Johanna Konta 7-6(5),6-1 on center court on Ladies Quarter-final Day on Tuesday. The other semi-final pits the seventh seeded Simona Halep of Romania, a 7-6(4),6-1 winner over Zhang Shuai of China against Ukrainian Elina Svitolina who beat Karolina Muchova of the Czech Republic 7-5,6-4.