There will be a first time Master’s 1000 winner on Sunday as the red hot Russian Daniil Medvedev takes on the seasoned campaigner David Goffin in the finals of the ATP Master’s series event in Cincinnati on Sunday. The Russian playing his 15th match in 19 days reached his third consecutive tour level final and a second Master’s series final in as many weeks coming from behind to beat the defending champion Novak Djokovic, while the 28 year old Goffin beat the challenge of the Frenchman Richard Gasquet in straight sets on Saturday.

The ninth seeded Russian who lost his first Master’s series final in Montreal last Sunday but could win only three games in his tame loss to the Spaniard Rafael Nadal, looked all but beaten as he faced a break point down 30-40 and 2-3 in the second set. Medvedev saved the break point and then turned the match in his favour as the World number One had no clue how to handle the Russian’s serve in the one hour and forty three minutes match. 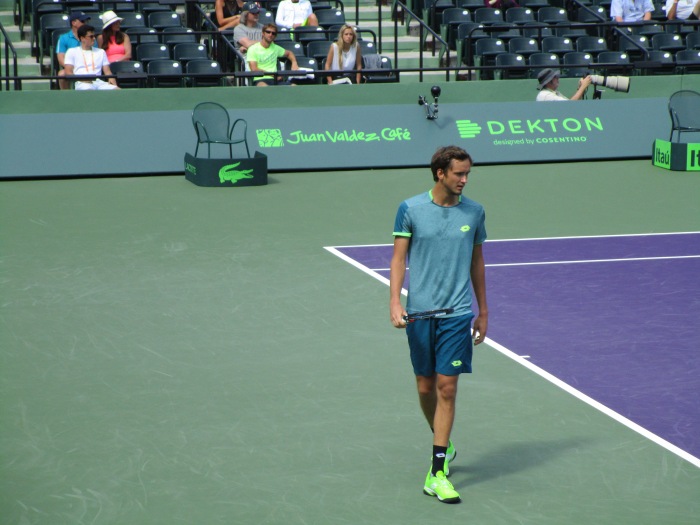 Only one break of serve in the first set enabled the top seed to clinch the set 6-3. Djokovic who has not lost a best of three set match at Master’s level tournament since Indian Wells in March 2013 to the Argentine Juan Martin Del Potro, looked to set for his 50th Master’s final but the Russian had other ideas. From break point down in the sixth game, the Russian second service averaged 117 mph and he had sixteen aces in the match against Djokovic, regarded as probably the greatest returner of service in the game.

The Serb who became the first player in the history of the game to win all nine Master’s series titles atleast once when he beat Roger Federer in the final last year, failed to save all three break points he faced and despite having an equal number of 75 points won in the match lost 3-6,6-3,6-3 to the Russian.

Djokovic still leads Medvedev 3-2 in their career head to head; he beat the Russian enroute to his record seventh Australian Open title in Melbourne this year but lost in three sets to Medvedev at the Rolex Monte Carlo Master’s on clay. Djokovic heads to the US Open next, in New York, beginning on August 26th, bidding to win the title for the fifth time and also hoping to win a 17th major title. Medvedev, who lost to Kyrgios in the final in Washington and to Nadal in Montreal last week, will rise to number five in the rankings with a win on Sunday.

The events in the evening session completely overshadowed the first semi-finals between the Belgian David Goffin and the Frenchnan Richard Gasquet, both ranked a career high number seven in the rankings in their prime. Gasquet, missed the first four months of 2019 and was playing on protected ranking had dropped out of the top 50 but will rise to 34 in the rankings after a last four finish in Cincinnati.

The 19th ranked Goffin, broke serve thrice and dropped it only once in the 75 minute encounter which we won 6-3,6-4 to reach his maiden ATP Master’s series final. He did reach the final of a bigger event at the World Tour Final in London two years ago losing to the Bulgarian Grigor Dimitrov in the title clash. He will be contesting his 13th Tour level final, his second of the year, losing to Federer on grass at Halle. Goffin has four career titles so far and with a win against Medvedev will be back in the Top Ten in the ATP rankings. The pair us tied at 1 win apiece, Medvedev won in straight sets at the Australian Open this year while Goffin won at Wimbledon last month in five sets.

Prediction :- This match should be quite a contest with Medvedev only a marginal favorite. Goffin has experience while the Russian will be under great pressure to win his first title after two losses in the finals two consecutive weeks. Both players going for a maiden Master’s title the one who holds his nerve should prevail. Fatigue might become a factor for Medvedev who will be playing his 16th match in 20 days. Goffin who got a walkover in the Quarter-finals should be super fresh for this one. Too close to call. I would expect Medvedev to win in three tightly contested sets.