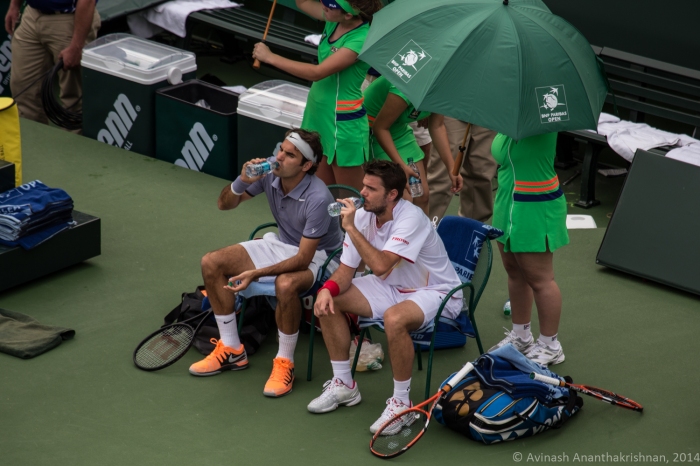 Roger Federer is only one win away from winning an unprecedented eighth Wimbledon title after seeing off a determined effort from Tomas Berdych with a 7-6(4), 7-6(4), 6-4 win in two hours and eighteen minutes of compulsive viewing on center court. Just twelve months ago, there were question marks about his future as a knee surgery kept him out of tennis for six months.

Standing between him and the most coveted prize in the game is the 2014 U.S. Open champion Marin Cilic of Croatia who showed tremendous character in his come from behind win against the American Sam Querrey as he won 6-7(6),6-4,7-6(3),7-5 in two hours and fifty six minutes in the first semi final on center court.

Federer, who last year was unceremoniously dumped by Milos Raonic of Canada after leading by two sets to one, got the break of serve in the fifth game but like he did in last years semi final against Raonic surrendered the break on a platter by serving two double faults as Berdych tied it at 4-4. The eleventh seeded Czech, who was a semi finalist (lost to Murray) last year and a runner up in 2010 (lost to Nadal) saved a break point in the eleventh game but Federer took control of the tie-break with a mini break to go up 3-1 with a crisp backhand volley winner at the net. He would finally claim it 7-4.

Games then went with serve in the third set and Berdych had two break points in the sixth game. Federer erased it with four service winners and the hapless Berdych who had toiled hard all afternoon looked demoralized completely and went on to lose his next service game to go down 3-4 against the run of play. Federer completed the formalities by holding his serves next two times and booked his ticket to an eleventh final. He won in 2003-2007, 2009 and 2012, and was runner up in 2008, 2014-15.

He beat the lowest ranked player in eight years to reach the semi final at Wimbledon in the 24th seeded Sam Querrey. The American had played three consecutive five set matches enroute to the last four beating Jo Wilfred Tsonga, Gilles Muller and Andy Murray along the way. The two times that Querrey and Cilic played at Wimbledon in 2009 and 2012, it went the distance with Cilic winning it 17-15 in the fifth set.

That epic match was the second longest in Wimbledon history lasting five hours and thirty one minutes and it was little surprise that the first set went to a tie-break. Each player lost points on their serve, at 6-6 a spectator was taken ill in the stands which resulted in a three minute delay and Cilic obliged with two unforced backhand errors which gave Querrey the first set.

Two missed break point chances seemed to add to Cilic’s frustration, but a backhand winner in the fifth game enabled the seventh seeded Croat to break at love. He would level the match at one set apiece clinching the second set 6-4. Despite his apparent tiredness, Querrey saved a handful of break points before going down 1-2. Querrey broke right back and it went in to another tie-breaker. Cilic was always in command and with a forehand winner took it 7-3.

Querrey would get an early break in the third game of the fourth set and like the previous four meetings between the two six feet six inch players it appeared that this too would go the distance. Cilic broke in the eighth game and then broke again in the twelfth game with a forehand winner to book his place in a second grand slam final having won the U.S. Open in 2014 which included a straight set pummeling of Federer in the last four. That is the only time Cilic beat Federer in seven meetings but he blew match points and a two set lead against the Swiss in last years quarter final, his third consecutive appearance.

Prediction :- Federer is 30-2 this year with wins at Australian Open, a third Indian Wells-Miami double, and an unprecedented ninth Halle crown. He is going for his 19th grand slam title and 93rd of his career. Cilic is 29-13 in 2017. He has seventeen career titles including one at Istanbul on clay this year. Federer leads 6-1 in the head to head against Cilic but the last three meetings the Croat has stepped up.

He lost the round of 16 in Toronto in three sets just before beating Federer in straight sets in New York in 2014. Last year Cilic had a two sets lead had three match points but Federer thwarted it. Cilic also lost the Queen’s final this year after having a match point against the Spaniard Feliciano Lopez.

Expect this one to be a classic. Federer has not dropped a set in six matches but can expect his toughest test yet. Too much at stake for Federer who at 35 can become the oldest Wimbledon champion. Cilic is 28 years of age and his time must come sooner rather than later. My pick is Federer in four tight sets with atleast two tie-breaks.

Seventeen years after her first of five Championships, 37 year old Venus Williams has entered her ninth Wimbledon final with a comprehensive 6-4,6-2 win over the local favourite Johanna Konta on Center court on Thursday. The last time she won here was in 2008, while she finished runner up last in 2009. She will be aiming for her eighth grand slam title having already won the U.S. Open twice at the Flushing Meadows in New York.

Standing between her and a sixth title which would also make her the eldest to claim one, is the 2015 runner up Garbine Muguruza of Spain who last year won her maiden grand slam title at the French Open in Paris. In the first semi final, the fourteenth seeded Spaniard ended the dream run of Slovakia’s comeback woman Magdalena Rybarikova 6-1, 6-1.

The 23 year old Muguruza who lost the 2015 final to Serena Williams, was in devastating form as she won the one sided contest in a mere sixty four minutes. She only faced one break point in the match and converted on five out of the twelve break points she had, also hitting 22 winners.

In the second semi final, games went with serve till 4-4 in the first set and Konta had two break point chances at 15-40 in the ninth game . Venus went on to win eight of the next nine points including seven in a row to claim the opening set 6-4. The second set was all Williams as she broke serve twice and tallied 19 winners.

Prediction :- Muguruza is 29-13 in 2017, while Venus is 26-7. Williams leads there head to head 3-1, but Muguruza claimed their last match in Rome on clay in three sets. The age difference between the two is 14 years but expect this one to be fiercely competitive. It is a tough call but I expect the young Spaniard to claim her maiden Wimbledon title in three sets.